I arrived at the Hub on day 3 of Startup Weekend to find that two more team members tapped out. The dev who had been programming the iPhone interface sent us an email mid-morning because there was too much snow in the streets and we simply never heard from the dev who had been working on the HTML. The only HTML code that was checked in was the setup I had prepared the night before and I was thankful that I had started it.

The biz team had sent a survey the night before and I forwarded it to a few friends. Several of them actually wrote me a quick message in response showing their support for my involvement with this project, for which I'm thankful:
Messages like that are really nice and were good motivation for the day ahead. With half the dev team gone, the remaining two of us quickly synced up on the situation and started attacking the challenge of getting the prototype ready for the 5pm demo right away. Through the day, we were heads-down and mercilessly turned away anyone who might distract us. Unfortunately, this included mentors, who I would have liked to have spent more time with, but we had our priorities and this was time for coding. We weren't going to let our team down by not delivering a prototype.

Part way through the day, the graphics came in and were beautiful. I've never worked with artists or designers before and it was a great experience to do so, seeing their expertise in action. The truth is, we didn't approach our product as something that was meant to solve a problem, as would a traditional startup. Rather, our aim was to create an experience that introduced joy into people's lives. The art and user experience design were integral to making this happen.

Since we were so tight on time, we knew that on the dev side we were going to have a pretty rough prototype. However, we wanted something more complete for the demo. One of our designers had done mock-ups of the app to show the user experience and to guide the dev team in what to implement. We took the mock-up and extended it to present a series of steps that captured the user experience. This was recorded on video and included in the demo. It came out great!

Through the day, the biz team was working out details in the concept and putting together ideas for the presentation. The presentations were alloted 4 minutes each with time for Q&A from the panel of judges. The team worked on a slide deck and for most of the day, we didn't see them since they were practicing and refining the presentation.

My partner dev and I coded right up to presentation time. Just as presentations were starting, we wrapped up the last bit of functionality we thought was required for the prototype and cheered a bit because we had actually gotten it done! We quickly created a bitly link and ran it over to the biz team so they could include it in the presentation. 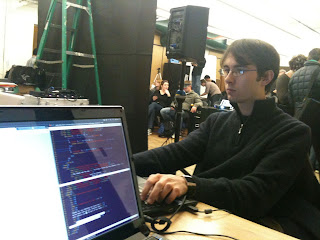 My fellow dev, Michael, working right up until presentation time!

As the presentations began, the biz team kept practicing. In short time, we were next up to present. Naturally, disaster struck as the computer on which the presentation was hosted refused to display to the projector. The organizers allowed us to swap places with the proceeding team and take another shot at setting up the presentation. Our team scrambled, transferring the presentation to another computer and making another attempt at getting it on the screen. Fortunately, it worked this time and we were up! 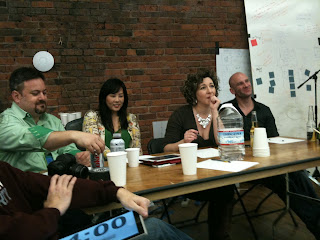 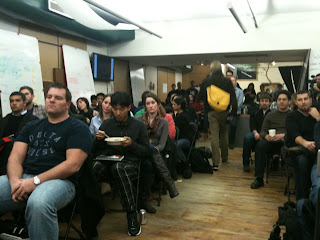 The illustrious judge panel (left) and the exhausted audience (right).

More disastor hit as we began presenting because at that point we were simply too tired to give a coherent talk. So we bumbled a bit with the informational portion of the presentation, but luckily the sense of the concept was more or less conveyed. The video lined up in the presentation and did its job of showing the experience the product creates. We never made it to the deeper explaination of the business model and customer validation, though we got a little of that out in the Q&A session. While we did an awesome job through the weekend, the steam ran out at the end and there was no way we could rank among the top projects. However, I had such an incredible experience and enjoyed working with the team so much that it didn't matter to me. 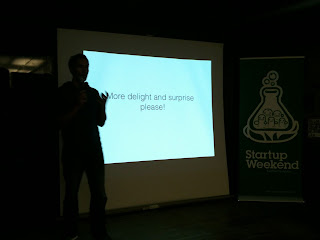 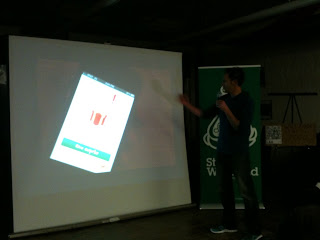 The presentation (left), including a pre-recorded video (right).

After presentations, we had a chance to talk to our fellow teams congratulating one another and getting more information about the cool things they had created over the course of 54 hours. The room was alive and everyone seemed pleased with what they had accomplished in such a short time.

A few minutes later, the judges came back and began announcing winners. They started with an honorable mention for best design. Then they moved on to best experience. To my team's astonishment, they proclaimed that we had won! It's hard to describe the incredible feeling of that moment, when we weren't expecting anything and yet were awarded one of the top spots in the competition! The judges continued with awards for best presentation, best market validation, and best overall. Afterwards, our team regrouped and the emotion spilled over. We were estatic!

We wound down the night with a beer at a bar across the street from The Hub, discussing the weekend and our experiences. A day later, we were notified that an article had been written up on GeekWire summarizing the weekend and mentioning our team as one of the winners.

This was an incredible end to an incredible weekend. I was completely amazed as I drove home, reflecting on everything that had happened. No amount of reading or conversation could have equaled the experience of actually doing it. I had a blast and can't wait until the next Startup Weekend! If you're around, I'll see you in Redmond!

Note: If you enjoyed reading about my Startup Weekend experience, check out my buddy Dwight's write-up to get another perspective. Dwight produced all the amazing art and branding for our project. You can get a third perspective from Katie, the dev who left the team the first night to help a team with no devs, at her blog.

Follow my Startup Weekend Seattle experience through the following progression of posts: